Sustainability with EO technology at the forefront of GEO Week 2019 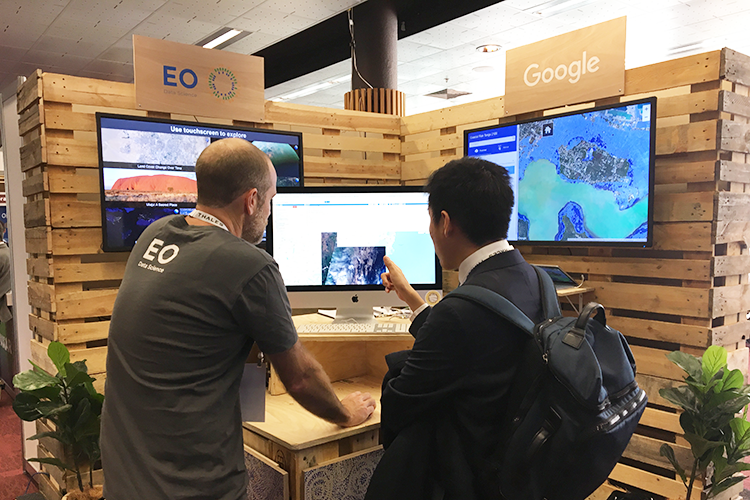 GEO Week 2019, hosted by the Group on Earth Observations, brought in over 1500 representatives from 57 countries for the five-day summit. For the first time, the summit included an industry track for organisations working with earth observation technology to collaborate in these discussions.

The event, which took place in Canberra from 4-9 November, encouraged discussions between ministers and the commercial sector to improve research methods and policymaking to achieve a more sustainable planet by making earth observation technologies more accessible.

EO Data Science officially launched at the 2019 GEO Week. EO Data Science is a dedicated entity of NGIS Australia that leverages earth observation technologies, such as Google Earth Engine, to create sustainable and innovative solutions across a number of industries.

The USD $3 million program aims to bridge the gap between science and application of projects that aim to enact  positive environmental change with the use of earth observation technologies. The program aims to significantly drive social change inline with the Sendai Framework for disaster risk reduction, The Paris Agreement (UNFCCC COP21) and The United Nations Sustainable Development Goals.

EO Data Science is excited to provide dedicated technical support and outreach services to GEO member countries in the program.

Championed by the Australian government, the first-ever industry track brought in 127 participating organisations with representatives from Google, Amazon Web Services, e-GEOS and Planet.

Nathan Eaton and Sam Atkinson were invited to present as part of the panel sessions covering the EO activities and industry involvement in the Asia-Oceania region.

The Australian Minister for Industry, Science and Technology and Minister for Resources and Northern Australia launched the “Current and future value of Earth and marine observing to the Asia-Pacific region” report at the GEO Week Ministerial Breakfast. The joined media release announced Earth and marine observing technologies will be worth a staggering $2 trillion by 2030.

JAPAN AND CHINA ANNOUNCED OPEN-DATA SHARING OF THEIR SATELLITES

Parliamentary Vice-Minister of Education, Culture, Sports, Science and Technology of Japan, Ms. Sasaki announced at GEO Week 2019 that Japan will open access to wide-swath observation data from the L-band Radar satellites, ALOS and ALOS-2, operated by the Japan Aerospace Exploration Agency. Japan are active members of the GEO community and their data will enable users to access historical time series of satellite imagery.

China also announced they will share global data from its Gaofen-1 and Gaofen-6 satellites. The data captured includes historical records, daily updated Wide-Field-of-View images and global coverage data, up to 16 metres resolution, according to the Deputy Director of Earth Observation and Data Centre, China National Space Administration, Ms Wenbo Zhao. This is the first time China has shared global data from these satellites, enabling free and unrestricted access, with the source cited, to the global community.

The Pacific region covers over 30 million square kilometres of Earth. Disaster response is critical with issues such as rising sea level and changing coastlines proving detrimental to lives in these communities.The Pacific Community, founded as the South Pacific Commission, announced a new partnership led by SPC’s Geoscience, Energy and Maritime Division alongside Pacific member countries, territories, partners, technical specialists and users. Pacific Island countries will now be able to collect and analyse remote sensing data, at the same cost as a single scientific marine voyage, to make informed decisions that will affect the lives of Pacific communities.

WHERE WILL GEO WEEK TAKE PLACE NEXT YEAR?

GEO Week 2020’s host country was announced at the closing of the GEO-XVI plenary. Next year's summit will take place from the 2-4th of November in Port Elizabeth, South Africa. 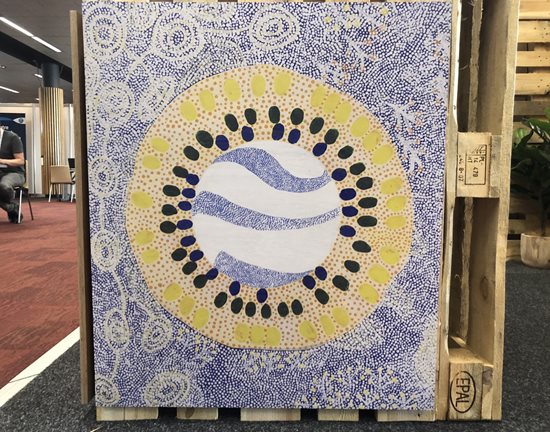 We were grateful to showcase a beautiful piece of artwork by Australian Indigenous artist, Jill Churnside, at the EO Data Science and Google Earth Engine booth during GEO Week 2019.

We acknowledge and thank Jill Churnside for her artwork.

If you have a project coming up and want to learn more about our work with Google Earth Engine, get in touch with the team.

About the author: Jaimee Nobbs

Jaimee is former Marketing Coordinator at the NGIS Group.