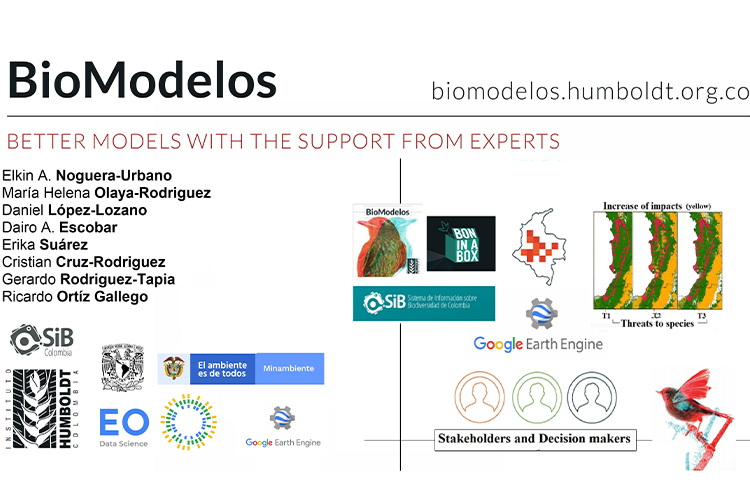 The BioModelos platform, built by scientists from Humboldt Institute is used to monitor species and identify near real-time loss of habitat.

The BioModelos project is one of the 32 selected as part of the Group on Earth Observations (GEO) - Google Earth Engine (GEE) Program that provides funding to tackle environmental and social challenges using open Earth data.

We spoke with Project Coordinator, Elkin Noguera-Urbano, to learn more about the project and how his team will be integrating GEE into the BioModelos platform to build free maps and protocols for monitoring and identifying loss habitats, in near real-time and at scale.

Elkin, can you tell us more about BioModelos and the project you are working on?

BioModelos is a free and accessible digital tool that enables experts to validate Species Distribution Models (SDMs) and publish species distribution maps in Colombia, an important method of measuring habitat suitability for species.

Species distribution is an Essential Biodiversity Variable, a measurement for studying and managing biodiversity change, as outlined by the GEO Biodiversity Observation Network (GEO BON). The platform is integrated with Wallace, a biodiversity modelling tool that is also part of the GEO BON framework.

What is the challenge that you want to tackle?

As such, we aim to generate SDMs within the same development environment in GEE to enable scientists to identify and be alerted to near real-time loss of habitat. This way, the integration of different types of data through GEE and the use of machine learning algorithms, will allow the generation of dynamic distribution models to evaluate the loss or gain of species habitats due to landscape transformations.

In addition, we are running species distribution maps at regional scale which allows us to improve the precision of our maps.

How will this project benefit your community?

Operating in the GEE environment, BioModelos will provide more comprehensive and timely information for decision makers in our community. This can be used to produce national reports for:

In addition, our project will promote the broad use of Earth observations in biodiversity research through the generation of SDMs and species-related indicators.

How does Google Earth Engine help you achieve your project-related goals?

GEE will play an important role in supporting BioModelos with the use of our infrastructure and data.

Initially, as part of the integration of GEE into the existing BioModelos platform, the team will begin developing and predicting dynamic SDMs for birds in Colombia. Over time, with the power of GEE, this can be scaled for any biological group and region on the planet.

We aim to improve the progress monitoring indicators within national reports using predictive modelling available within GEE. These indicators make up and address several Aichi Biodiversity Targets, including:

During the program, our team will also increase our GEE capacities via training and the exchange of information and experience with the EO Data Science team,  and apply this to generating SDMs that are necessary for decision-making at local, regional and national scale.

EO Data Science partnered with Google Earth Engine and the Group on Earth Observations to launch the GEO-GEE Program, which supports GEO member countries to operationalise their science as they strive to tackle the world’s biggest sustainable development challenges.

In July 2020, 32 projects across 22 countries were selected into the program which offers $3 million USD towards product licenses and $1 million USD in technical support from EO Data Science. This funding and support will help these projects tackle global challenges using open Earth data. Read the announcement and list of winners here.

About the author: Jaimee Nobbs

Jaimee is former Marketing Coordinator at the NGIS Group.