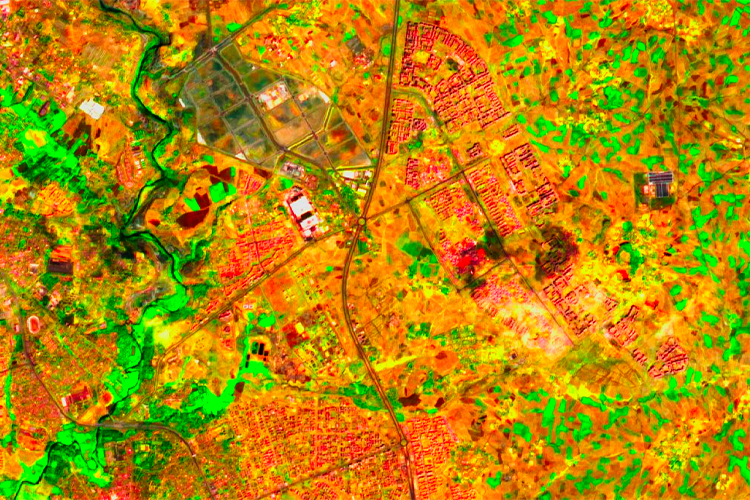 To meet the socio-economic demand of our increasing city-based population, new urban settlements and developments are replacing lands that were formerly covered with diverse crops. As a result, the tradeoff between urban expansion and agricultural sustainability is becoming a major challenge for most of the world’s metropolitan cities.

Scientists at Arba Minch University and International Water Management Institute (IWMI) are working with support from Water Security Hub to produce a scalable and adaptable platform for tracking and quantifying the spatiotemporal change of urban agricultural areas anywhere in the world. This project is one of the 32 selected as part of the Group on Earth Observation - Google Earth Engine (GEE) Program that provides funding to tackle environmental and social challenges using open Earth data.

We spoke with the project lead, Wegayehu Asfaw, to learn more about their project and how his team will be using GEE to create an interactive Urban Agriculture Intensity (UAI) monitoring tool that can be implemented across the world.

Wegayehu, can you describe the challenge your team wants to tackle with this project?

Urban agriculture plays an indispensable role in feeding the population living in cities and providing ecological services. However, most of the land used or that is suitable for growing crops in surrounding cities of developing nations are rapidly transforming into settlements due to a higher rate of population increment and uncontrolled urban expansion. As a result, the paradox between the increasing food demand and shrinkage of farming areas is a challenge facing many cities in the developing world.

How has this challenge impacted your community in Addis Ababa?

Addis Ababa is the capital city of Ethiopia, home to over five million residents which are expected to reach around nine million by 2035. This rapid population increment of the city is resulting in an unprecedented expansion of built-up areas. Most of the expansions are encroaching on farmlands which supplies approximately 60% of the city’s crop and vegetable demand. As a result, the loss of agricultural land is causing a reduction of produced commodities and inflating prices, severely impacting the majority of low-income earning residents.

How will your project tackle this challenge?

We are creating an interactive monitoring tool that will generate quantified knowledge by articulating recent changes to urban agricultural intensity in Addis Ababa.

In this project, we will be able to question how, where, and when changes to the urban environment happened. The outcome will contribute to the second and eleventh UN Sustainable Development Goals that focus on eliminating hunger and ensuring sustainable cities, respectively.

The findings will benefit researchers, urban planners, policymakers and practitioners to improve cities' living environment for their inhabitants.

How does Google Earth Engine help you achieve your project-related goals?

Within our UAI monitoring project, GEE gives us the flexibility to access several Earth observation datasets, explore different artificial intelligence computation approaches, and to share our findings through an interactive platform.

How will the GEO-GEE funding help your project?

The GEO-GEE funding is allowing us to access additional storage and receive support from experienced professionals. The technical support from EO Data Science is building our capacity and knowledge on how to approach and solve the issue of UAI using GEE.

At the end of the project, we hope to have achieved our goals by producing a GEE-based interactive UAI monitoring tool.

By making our tool easily transferable, we would like to support the decision-making processes related to urban agriculture planning and implementation across the world. We also hope that our UAI monitoring tool will help researchers and academics that are interested in working on urban agriculture-related scientific themes.

EO Data Science partnered with Google Earth Engine and the Group on Earth Observations to launch the GEO-GEE Program, which supports GEO member countries to operationalise their science as they strive to tackle the world’s biggest sustainable development challenges.

In July 2020, 32 projects across 22 countries were selected into the program which offers $3 million USD towards product licenses and $1 million USD in technical support from EO Data Science. This funding and support will help these projects tackle global challenges using open Earth data. Read the announcement and list of winners here.

About the author: Amy Boyes

Amy is the Marketing Assistant at the NGIS Group.