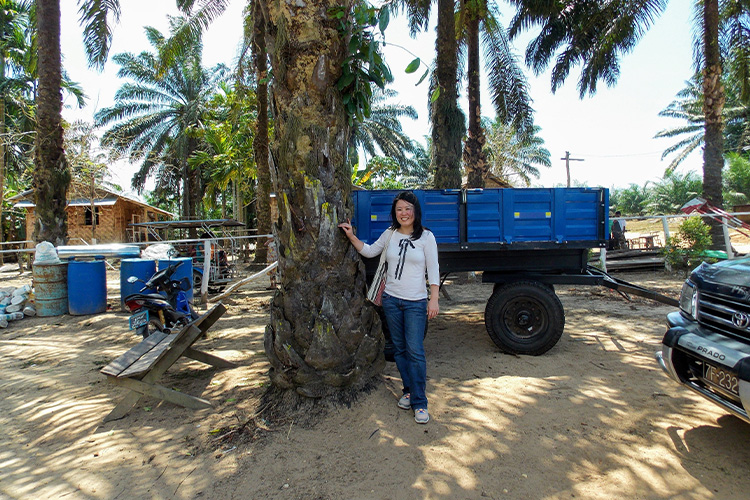 Palm oil is the most widely consumed vegetable oil on the planet and half of all packaged products contain it. Indonesia and Malaysia have long held the spotlight for palm oil plantations in their countries and the reputation that comes with it. Palm oil plantations can carry many adverse impacts including deforestation, loss of biodiversity, climate change and displacement of Indigenous peoples.

Myanmar, a Southeast Asian nation of more than 100 ethnic groups, planned to join Indonesia and Malaysia as a large-scale producer of palm oil in the late 1990s. The Myanmar government has handed out more than 400,000 hectares (nearly a million acres) of palm oil plantations to 44 companies, some of which were allocated in proposed national parks and without taking into consideration the environmental or social impacts.

Keiko Nomura, a former PHD student at the University of Edinburgh, led a recent study that found nearly 60 percent of palm oil plantation concessions in Southern Myanmar have not been developed and remain either forested or occupied by other crops.

We spoke with Keiko as part of the #GEEImpact campaign to understand how she used Google Earth Engine (GEE) to investigate the location of palm oil plantations and examine the actual extent of planted and unplanted areas accurately.

KEIKO, CAN YOU TELL US ABOUT YOUR PROJECT?

My project identified where the unconverted forests are within palm oil plantations areas in Southern Myanmar. Using Google Earth Engine and supervised classification, I found that only 15 percent of the total plantation area is currently planted with oil palm (49,000 hectares), while 25,000 ha is planted outside concession boundaries, possibly due to uncertain or changing boundaries.

This leaves the chance for other land uses, including forest conservation and communities’ livelihood needs. Reconsidering the remaining plantation areas can also significantly reduce future emission risks from the region.

WHAT WAS THE CHALLENGE THAT YOU WANTED TO TACKLE?

The challenge was to find impactful conservation opportunities that may be low hanging fruit for the Myanmar government. Just because the land has been allocated by the government for palm oil plantations, does not mean the trees are gone. However, if we don't do anything about it now, they can be legally cleared. They have a second chance to save the trees.

A technical challenge also presented itself when it came to distinguishing visibly similar crop types like rubber plantations and other trees. Oil palm trees are also not visibly different even at a 10m resolution.

HOW DID YOU OVERCOME THIS TECHNICAL CHALLENGE?

The technical challenge was overcome with new satellite data from Sentinel-2 (released at the time), which has almost hyperspectral bands (‘red edge’ bands) at a relatively high resolution. I believe my research showed the significant potential of Sentinel-2 images in classifying visibly similar and small patches of tree crops.

HOW DID YOU USE GOOGLE EARTH ENGINE TO HELP ACHIEVE YOUR PROJECT-RELATED GOALS?

I used Google Earth Engine extensively to obtain image collections over several months, then used thousands of reference data points to calculate the palm oil area and other land cover through Sentinel-1 and Sentinel-2 satellite data.

WHAT IS 'THE WIN' FOR YOU AND YOUR COMMUNITY?

The win for me is to provide information that is difficult to get from the ground. Stakeholders and policy makers should have access to all the information that science and satellite images can provide, in order to make informed decisions about the land use.

About the author: Amy Boyes

Amy is the Marketing Assistant at the NGIS Group.